There’s a myth that creativity is something that you have to be born with but this isn’t the case – anyone can be creative. 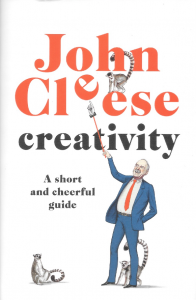