Discipline your business thinking, and the way in which you organise information. 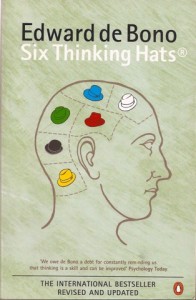 “It is not a complete solution.” Smart Leadership (Yudelowitz, Koch & Field, 2002)

1.     Six frames of thinking are probably too many for most people to remember accurately. (The vast majority of business people are unable to name all six hat colours, let alone their designation and function).

2.    It is hard for anyone to adopt one other mode of thinking, let alone six