Competition isn’t always as lopsided as it seems, because being at a disadvantage could actually be an advantage. 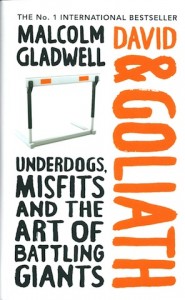 · People fundamentally misunderstand the meaning of advantages and disadvantages.

· The book uncovers the hidden rules that shape the balance between the weak and the mighty, and the powerful and the dispossessed.

· It is sub-titled Underdogs, misfits and the art of battling giants.

· It explores the struggles in Northern Ireland, examines the minds of cancer researchers and civil rights leaders, and digs into the dynamics of successful and unsuccessful classrooms.

· Underdogs develop hidden talents to gain an advantage. Often they are tougher and more ingenious than supposedly more powerful people.

· Conversely, having advantages can sometimes prove a disadvantage. Rich parents have everything, but can struggle to provide a moral or financial compass for their children.

· As such, a degree of misfortune can be a tremendous asset – what the author calls desirable difficulty or relative deprivation.

· The idea that small class sizes are desirable may not be right. Too few and the critical mass is too small to generate effective education.

· Sending bright students to top institutions can be counterproductive because in comparison to all the other very bright students many feel inadequate and drop out unnecessarily.

· As ever, the author challenges our preconceptions in a charming way. He regularly suggests that bad is good and good is bad, and what seems to succeed fails, and vice versa.

· The examples of underdogs playing by a different set of rules, or none at all, can be an inspiration. (They do however need to be tempered with an understanding that some of these actions are by their very nature disagreeable). Disagreeableness is needed for underdogs to prevail.

· Absolute power doesn’t work very well because there is always someone who has nothing to lose and so refuses to cooperate. It therefore does matter that those in power are at the very least respected, otherwise they have no chance of holding sway over the underdog.

· Much of what we consider valuable in the world arises from lopsided conflicts, because facing overwhelming odds produces greatness and beauty.

· But we consistently get these conflicts wrong because we misread them. David and Goliath wasn’t a case of mighty versus weak – we just saw it that way based on physical size.

· Despite the wonderful rolling narrative, there isn’t really any evidence that hopeless causes are more ingeniously conceived, or that being the underdog is ever really desirable.

· The idea that a number of people with difficult upbringings have a disproportionate amount of resilience isn’t very new.