Concentrate on getting something done as much as having the original idea. 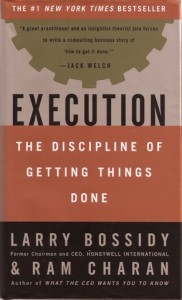 Execution is a discipline, and integral to strategy

Execution is the major job of the business leader

Execution must be a core element of an agency’s culture

1. Know your people and your business – leaders have to live their businesses

2. Insist on realism – honesty and a lack of fear in discussing issues is vital

3. Set clear goals and priorities – never set more than 3 or 4

4. Follow through – setting goals is no good if they don’t happen

5. Reward the doers – there must be link between execution and reward

6. Expand people’s capabilities – see every encounter as an opportunity to coach

7. Know yourself – you need emotional fortitude and personal honesty