The one sentence summary
There is no evidence that the advice peddled by the leadership industry actually works – doing the opposite might even work better. 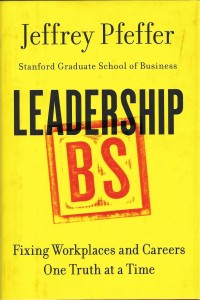 • There are too many leadership failures, career derailments, and toxic workplaces filled with disengaged, distrustful employees.
• Most leadership development efforts fail because most of the oft-repeated wisdom about leadership is based more on hope than reality, on wishes rather than data, on beliefs instead of science.
• Five attributes are often asserted to be useful to successful leadership: modesty, authenticity, truthfulness, trustworthiness, and concern for others. Is there any evidence that these qualities do in fact characterise most leaders? No. Is there data that can help us understand why doing the opposite of what the leadership industry recommends might be much more sensible? Yes.
• Modesty: leaders aren’t, and immodesty actually leads to greater success (for the individual).
• Authenticity is misunderstood, overrated, and may actually be impossible. Most leaders need to be inauthentic – subsuming their personal feelings and adjusting their behaviour to suit a variety of situations.
• Truthfulness is often unhelpful. Leaders lie all the time, but misrepresentation and breached agreements are a part of business and not as harmful as you think. In fact everyone lies (40% of people have lied in the last day), and there are few sanctions for lying, so everyone carries on.
• Trust: it doesn’t get leaders anywhere, and when they violate it, nothing much happens – people even expect contract violations from companies.
• So we should stop confusing the normative with the descriptive and focus more on what is: watch actions, not words.
• Sometimes you have to behave badly to do good.
• Advice to leaders depends on the ecosystem in which they are operating.
• The personal moral is: take care of yourself because most leaders don’t reciprocate.

WHAT’S GOOD ABOUT IT
• People put their faith in leaders, even bad ones, because ironically they prefer it to freedom. They often suffer from cognitive dissonance: the two ideas that (a) you have joined a place voluntarily and that (b) the leader is incompetent or mean, are highly discordant. It’s much easier to assume the leader is okay and carry on.
• NPI is the Narcissistic Personality Inventory. It’s a test that shows that leaders of this type have a huge sense of self-importance, arrogant behaviour and attitudes, a lack of empathy for others, a preoccupation with power, and a belief in their own status.

WHAT YOU HAVE TO WATCH
• Strangely, there is no mention of bullshit, or even BS, in the entire book.