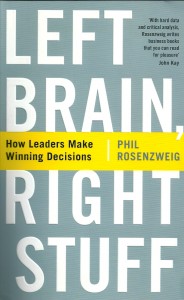 · Success calls for calculation and courage, action as well as analysis.

· Part of making decent decisions is the questions you ask first. The best ones are:

· Are we making a decision about something we cannot control, or are we able to influence outcomes? If you can’t, don’t bother. Equally, many managers underestimate the effect they can have, which can be just as bad.

· Are we seeking an absolute level of performance, or is performance relative? Are we trying to do well, or to do better than our rivals. Constantly looking at the competition can be irrelevant, but needing to exert control and outperform rivals is the hardest thing.

· Are we making a decision that lends itself to rapid feedback, so we can make adjustments and improve a next effort? If not, think harder to reduce error.

· Are we clear what we mean by overconfidence? The term is usually used in hindsight, but some level of confidence or bravery is certainly necessary, otherwise too many managers believe they are powerless.

· When the course of action is uncertain, do we have a sense of on which side we should err? Sometimes doing nothing is preferable, but not if it consistently leads to a mood of helplessness.

· What you can achieve is often linked to how hard you deem the task to be. Dr. Jessica Witt produced an Ebbinghaus illusion (named after the 19th century German psychologist), showing two identically-sized circles. One was surrounded by five other circles (big surround), and the other by eleven little ones (small). Golfers holed twice as many in the version that made the hole look larger (the small surround).

· In Through the Looking Glass, the Red Queen explains to Alice that in her country “it takes all the running you can do, to keep in the same place.” Thus in Red Queen Competition, companies can quite easily improve their performance whilst still falling further behind their competitors.

· If we exaggerate our base rate view, we ignore the evidence of the past and make wildly optimistic predictions – what Kahneman and Tversky called the Inside View. The Outside View asks: what have other people done in comparable settings? This always yields a more realistic prediction.

· Learned optimism – being positive that doing something will get a result – is crucial in business. Sometimes called a deliberate mindset, this is a frame of mind that removes paralysis and gets on with it.

· Not much. As usual Rosenzweig writes clearly and demonstrates a firm grip of behavioural bias and how it affects business decisions.