Nothing exists in limbo and context is everything, so you need to out-think the problem by changing a piece of it. 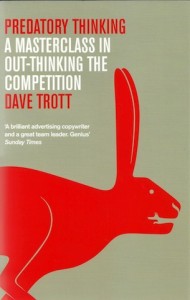 · This is a series of anecdotes providing sage wisdom on all matters creative.

· Billed as a masterclass in out-thinking the competition, the book’s main message is to look at situations you can’t solve and change them into ones that you can solve.

· The main themes are:

· The principles here are most powerfully conveyed in short stories – drawing on anything from his family, the Second World War, Socrates, and Picasso, to a range of colleagues and students.

· Unsurprisingly, the philosophy is the same as his previous book, but many of the themes bear repetition:

· All you’ve got to beat is yourself – we stop us, not anyone else.

· You don’t have to win – you just have to make the other lot lose.

· If you’re creative, then you have to create. If you don’t do it, it won’t happen.

· No one knows what’s in your head – you choose your own reality.

· Nothing is ‘wrong’ – just inappropriate.

· People don’t think like we think they should think – punters haven’t read the brief.

· Reasonable people don’t do much – so be unreasonable.

· The story on the back cover is at least 20 years old. It’s the one about the guy who puts his trainers on – not to outrun the tiger, but his mate.