Individuals often face incentives that make them undermine the common good, and taxes on harmful activities are more efficient and less intrusive at dealing with this than direct regulation. 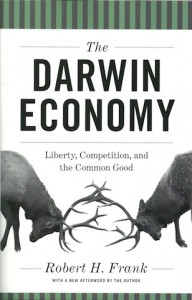 · In the next century Charles Darwin will unseat Adam Smith as the intellectual founder of economics, because Darwin’s understanding of competition describes economic competition more accurately.

· Economic competition does not create a perfect world – instead it leads to individual “arms races” and encourages behaviour that is enormously harmful to the group and provides no lasting benefit to individuals.

· The solution to taming the Darwin Economy is to tax harmful behaviours, not prohibit them. This would increase the economic pie, reduce government debt, and provide better public services – without requiring painful sacrifices from anyone.

· Taxes on harmful activities kill two birds with one stone – generating revenue while discouraging behaviours whose costs outweigh their benefits.

· Activities that cause direct harm include pollution, traffic, congestion, tobacco and alcohol. Indirect examples include wearing cycle helmets – do you make it a law or not?

· Libertarians cite Smith’s invisible hand narrative as evidence that an unregulated (and lightly taxed) market will generate perfect competition and a healthy societal balance. Darwin’s Wedge disagrees – it drives a wedge between individual interests and the benefit of the group.

· The USA is becoming an ignoramitocracy paralysed by ignorance-driven politics. Economists have “high IQ but no clue.”

· People’s positions are relative – they can be doing quite well, but still not feel like it relative to others. Expenditure cascades move the frame of reference upward and encourage people to buy things they don’t need, such as bigger houses, just because richer people do.

· This is the Positional Consumption Beast – a monster that keeps getting bigger because people don’t know how to stop competing and being wasteful.

· Pushed too far, this becomes the Tragedy of the Commons, in which everyone takes their bit and then there’s nothing left (fishing stocks, for example).

· In the Myth of Ownership, people claim that all their income is their own money, but in fact it is impossible to have a functioning society without taxation because nothing would work or be affordable to the state.

· “If it moves, tax it; if it keeps moving, regulate it; if it stops moving, subsidize it.” Ronald Reagan

· Most reference points are American, and there is a general assumption that the reader is familiar with contradictory views about the US economy.