The one-sentence summary
Biomimicry can often balance the competing desires of creating more powerful, lucrative technologies while preserving the planet. 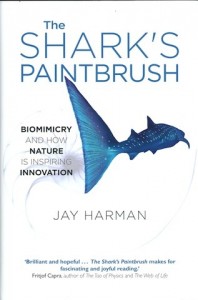 • This is a fascinating book about biomimicry and how nature is inspiring innovation. The term biomimicry was first coined by Janine Benyus in 1997 to describe how nature can inspire ingenious solutions.
• Nature has found answers to many problems that are more energy and cost-efficient than their human counterparts.
• As such, this discipline can often balance the competing desires of creating more powerful, lucrative technologies while preserving the planet.
• A shark’s skin is rough, but rather than making it less slippery, it roughs up the water around it, meaning less water sticks to the shark to slow it down.
• Inspired by the shark’s dermal denticles, German researchers have developed a paint that, when applied with a particular stencil, creates a rigid pattern that improves the surface fluid dynamics of aircraft, ship hulls and wind turbines.
• Nature’s strategy is to find the shortest distance between two points.
• Of all the species, we are the only ones without an ‘enough gene’ – we are greedy and see everything as “If you win, I lose.”
• 75% of consumers would prefer ‘green’ products, but 98% of products are greenwashed – there is no evidence that they are any better for the environment.

WHAT’S GOOD ABOUT IT
• It outlines ten ways to run a modern company, inspired by the manner in which a redwood forest works:
1. Use waste as a resource – reduce and recycle
2. Diversify and cooperate with others to fully use the habitat
3. Gather and use energy efficiently
4. Optimize rather than maximize – focus on quality not quantity
5. Use materials sparingly
6. Don’t foul your nest – avoid toxic behaviour
7. Don’t draw down resources – don’t live beyond your means
8. Remain in balance with the biosphere
9. Run on information – avoid surprise with a rich feedback system
10. Shop locally
• This is summaized as cross the divide, turn the ship, and plan for patience.
• On company visions: “For every vision, there is an equal and opposite revision.”
• There are 100s of product examples: bird glass containing fibre inspired by spider’s webs that stops birds flying into it because they can see it, and fungi that map a more efficient rail network to connect Tokyo to 36 cities.
• Resistance to change in companies is described as infectious repetitis.

WHAT YOU HAVE TO WATCH
• At 300 pages it is longer than it needs to be.