In macroeconomics, everything is related to everything else, so every policy decision has an effect elsewhere. 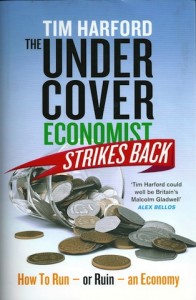 · This is all about how to run – or ruin – the economy. In an original approach, the reader is asked to assume the role of Chancellor of the Exchequer. A question and answer format puts you through your paces to see how good a job you would make of running the economy.

· Whereas his previous books have been concerned with microeconomics (Why does a cup of coffee cost less when it is 100 yards further away from a station?), this one is about macroeconomics (the big overview, and very much interlinked with other nations).

· Macroeconomics is all about what is not seen – all the knock-on effects that occur when factors such as taxation, pay, employment and so on, are adjusted. It’s all interrelated, so much of the time the true effects of policies are not really understood.

· A hundred or so years ago a man called Bill Phillips invented an extraordinary machine called the MONIAC (Monetary national Income Analogue Computer). This was a hydraulic machine that used liquid to represent the value of different parts of the economy – tax income, expenditure etc. Reduce or increase one element, and the liquid moves elsewhere to demonstrate the effect on the economy. It proved remarkably accurate.

1. John Maynard Keynes: an economy’s output is constrained by the demand for goods and services

2. Jean-Baptiste Say: an economy’s output is sometimes constrained by their potential supply

· The author provides a user’s manual for the economy, and guides you through dealing with recession, inflation, unemployment, taxation, providing fiscal stimulus, the subtleties of GNP and statistical reporting.

· Money is a store value. It enables people to transact, but it is not actually worth what it claims.

· Moderate inflation is desirable for forward motion. Hyperinflation is clearly not. As the analogy goes, an occasional drink can kick-start an evening, but drinking constantly or excessively is not a good idea. Deflation is bad all round.

· Management quality in companies varies a lot: a typical Tanzanian worker produces in a month what an American produces in a day. The countries with the worst managers are India, China, Brazil and Greece.

· Not much. It’s an excellent layperson’s guide to how economics works.