Persistent competition is frequently divisive, so we are more likely to achieve better outcomes by collaborating. 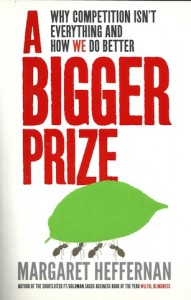 · Competition isn’t everything and we do much better when we work together.

· Competition for fame, money, attention, status, and more doesn’t work very well. It is supposed to identify the best, make complicated decisions easy, motivate the lazy and inspire dreamers, but it regularly produces what we don’t want. The best do not always rise to the top.

· Instead, many individuals and organisations are finding creative, cooperative ways to work together. Some call that soft, but it’s arguably harder than anything they have done before.

· Examples of unproductive competition are:

· Education – by making pupils chase grades rather than learning experience, the product is prized over the process

· Status – our sensitivity to power and rank is immediate, unconscious and persistent

· Sport – relentless competition stops you being who you are (according to Andre Agassi), and winning at all costs comes at a price – rivalry, arrogance, selfishness, and a lack of humility and generosity

· Business – anything successful is now cloned, reducing originality; most areas are supersized, with everything getting bigger and bigger; and yet companies also go as low as possible on price, leading to corner cutting

· Countries – they all want to beat each other economically

· The phrase pecking order comes from hackordnung, a word coined by a brilliantly-named German called Schjelderup-Ebbe, who analysed how chickens dominate each other in the farmyard.

· In another chicken experiment, William Muir created a supergroup of top-breeding chickens and put them in one coop together. Instead of producing a high yield of eggs, they beat the crap out of each other and performed far worse than groups left to their own devices. Competition had an undesirable outcome.

· The Intel slogan coined by Andy Grove (“Only the paranoid survive”) is counterproductive – in such cultures creativity is feared (if you have a good idea, you stay quiet), and only compliant people move up the chain.

· The only solution to the tragedy of the commons raised by Garrett Hardin is a fundamental extension of morality, but sadly most people think this will never happen.

· Somewhat frustratingly, the book doesn’t really have a conclusion or offer any ways forward, although it does admit as much.

· It has around 400 pages of rolling narrative with no sub-headings, so there is precious little help with signposting any sub-themes below the chapter ones.