Gather both general and specific materials, ponder on the issue, then do something completely different for a while, and a decent idea will arrive. 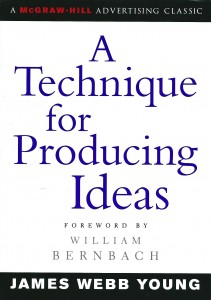 · Originally produced in 1965, this short book was arguably the first to attempt to explain how to generate an idea, and lift the veil of mystery from the creative process.

· The author claims that the production of ideas is an operative technique – exactly the same as producing products on an assembly line.

· As such, it can be learned, controlled and practiced in exactly the same way.

· The Italian sociologist Pareto (who wrote in French) thought that the world could be divided into two types of people:

1. The speculator – speculative, constantly preoccupied with the possibilities of new combinations.

· Nevertheless, even the conservative mind can be trained in the method by which ideas are produced. Here it is:

1. Gather raw materials – there are two types; those specific to the issue in hand, and those that are general. (The latter should be collected all the time. This so-called fugitive material eventually finds its use when later combined with a specific need).

2. Mental digestion – work over materials in the mind.

3. Incubation – do something else while the idea synthesises.

4. Eureka moment – the idea will appear apparently out of nowhere.

· That’s why it pays to be a mental magpie – constantly on the lookout interesting things that may be of value later.

· You can read this in twenty minutes and understand what to do.

· Not much. It’s a discussion point, but one could argue that, even after reading this, a so-called ‘uncreative’ person could still fail to have a decent idea.