Success always starts with failure, and in a rapidly-changing world adaptive trial-and-error processes are best for tackling major issues. 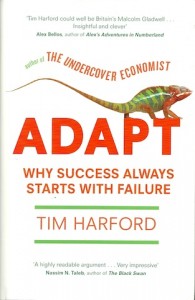