Although arguments appear to be tearing us apart, conflict can bring us together if approached in the right way. 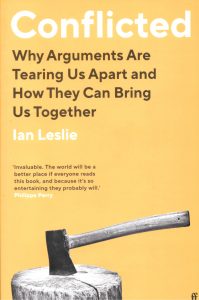