Decision science is not smoke and mirrors – it can be applied in a practical way if properly understood. 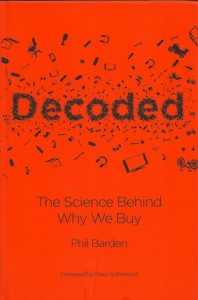 · The science behind why we buy can now mainly be explained.

· Decision science is not smoke and mirrors – it can be applied in a practical way if properly understood.

· Our autopilot (implicit, system 1) has a far greater bearing on purchasing decisions than many think. Behavioural economics has been saying this for some time. This is effortless, automatic, fast action.

· The pilot (system 2, explicit) is the rational, apparently controlled process that is usually mentioned in research as a reason to buy – but this is often misleading since people can’t even explain it themselves.

· What fires together wires together: the autopilot brain receives 11 million bits of information a second. The extent of this can be seen by brain scanning machines, but is so subtle that most marketing strategies fail to acknowledge it sufficiently.

· There are three main purchasing principles:

2. Immediacy: the autopilot prefers immediate rewards, not future ones

· Purchasing involves a decision between reward (ownership) and pain (price): the brain offsets the two to create a ‘net value’. Price lists with no pound signs sell more because the monetary symbols trigger pain signals.

· Signals sent by marketers (sometimes unwittingly) are recorded in mental concepts based on learned associations in memory. Purchase decisions are mainly based on these rather than specific messages.

· It is possible to change behaviour without changing minds – usually by changing the ‘decision interface’ – the context at the moment of purchase.

· People ‘self-herd’ by gaining implicit guidance from their own past actions – this is not the same as straight copying.

· Triggering process endowment is important – people are more likely to purchase again with a loyalty card showing some stamps already filled in because they feel they are already underway.

· We are victim to hyperbolic discounting: we will happily have £100 now rather than £120 some time later.

· Brain science shows that consumers do not regard brands as people. Their reactions are dictated by the brain part that deals with physical objects – a bit of a kick in the teeth for the “If your brand were a person…” school.

· JND is a good concept: Just Noticeable Difference. You can plot on a graph the moment where people actually spot the difference and act differently – think price, product specification and so on.

· Not much. There’s a fair bit of jargon but it’s clear and well laid out.