Work as hard as you can to make everything as simple as it can possibly be. 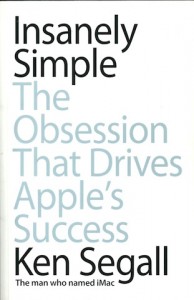 …all embodied in the grammatically infuriating endline Think Different.