It Doesn’t Have To Be Crazy At Work – Fried & Hansson

Long hours, excessive workloads and functioning with a lack of sleep should be marks of stupidity, not badges of honour. 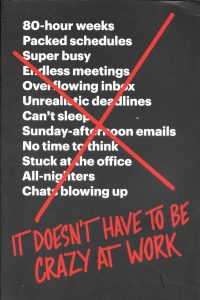