Effective leaders manage the people, not the numbers – making them feel safe and keen to follow. 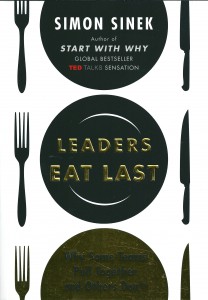 · The book looks at why some teams pull together and others don’t.

· Proper leaders are the ones who run headfirst into the unknown; who put their interests aside for the greater good. They would sooner sacrifice what is theirs to save what is ours.

· This makes followers feel safe (a primal need), which is why they will work tirelessly to see their leaders’ visions come to life. In a circle of safety, we feel like we belong.

· The title refers to the tradition in the US Marines in which, at mealtimes, the junior people are served first. This reinforces the fact that the true price of leadership is the willingness to place the needs of others above your own.

· The author charts our needs based on the chemicals we crave:

Serotonin – the ‘leadership chemical’ – the pride from having others respect us

Oxytocin – friendship, love and deep trust – the cornerstone of teamwork

· Modern managers are too abstracted from their people and tasks, and they have a destructive abundance – too much of everything.

· To cope, they need to bring people together and keep it real, keep the numbers manageable (Dunbar’s number means no more 150 in a team), meet their people properly, give them time (not just money), and be patient for results.

· The Boomer generation is described as the ‘pig in the python’ – a demographic bulge that grew up used to getting what it wanted. When these people became leaders, they had a negative effect on what proper leadership should be, which is why we now have so many leadership failures.

· There is a fascinating but tragic example from the Taj hotel group. Of the 31 people who died in the Mumbai terrorist attack in 2008, half were staff, some of whom were so determined to protect guests that they re-entered the building even after escaping, to help people further.

· Creating vicious tension in a company creates short-term value, and also deep resentment. At GE, Jack Welch introduced a ‘rank and yank’ policy. Every year he would fire the bottom 10% of managers and reward the top 20% with stock options. Nice bloke.

· “How you do anything is how you do everything.” Zen Buddhist saying.

· The structure is a bit messy. The book is divided into 4 sections that are not signposted in the contents (the force, the path we chose, challenges & temptation, and the abyss); this doesn’t entirely tally with the part or chapter headings, but is arguably a clearer sequence.