The internet is transforming the way we manufacture – we can all be makers now. 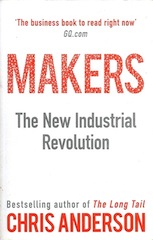 · Over the past ten years the internet has revolutionised the way we sell. Now it is transforming the way we manufacture.

· Astonishing developments in technology, such as 3D printing and open hardware, are combining with a new frame of mind to generate a vibrant new maker economy.

· This could all lead to a third industrial revolution, in which a series of cottage industries begin to replace conventional large-scale manufacture.

· Mass production works for the masses, but what works for you as an individual?

· Being able to do something on a desktop changes everything.

· In this respect, we are all designers now, so we might as well get good at it.

· Four machines in particular are tools of transformation:

· Open organisations benefit most by having open supply chains and being free with ideas – often non-employees willingly fix and improve products.

· Making and selling often end up being the same thing in the maker movement – many products are pre-funded by people who already pledge to buy before the product is made.

· The book is a logical extension of his previous theories in The Long Tail and Free, but the overall point could probably have been made in an article or blog rather than a whole book.