Economic growth is generated by a circulatory flow of wealth through society – upward from the private sector and downward by the state. 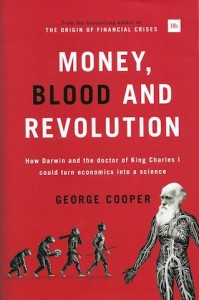 · Economics is a broken science, believing in multiple, inconsistent things at the same time. These inconsistencies, and the apparently unresolvable debates between leading economists, along with incoherent government policies, are all symptomatic of a subject in crisis.

· Meanwhile mathematical models are becoming more complex but their predictive ability is not improving.

· Happily, scientist and philosopher Thomas Kuhn worked out what needs to be done to fix a scientific crisis. When it happens, there are 5 stages:

3. Revolution – a new paradigm emerges that resolves many of the problems of the field.

4. Rejection – the backlash starts and the old guard say it is rubbish.

· Viewing the economy as a circulatory system (like blood flow) helps to reconcile the role of the state (downward flow) and the private sector (upward). Like the biceps and triceps, you can’t have one without the other. Understanding their interrelationship helps to identify where to inject fiscal stimulus.

· The book analyses developments and paradigm shifts in astronomy (the planets do not go round the earth – Copernicus), anatomy (blood does not evaporate as it reaches the extremities – Harvey), evolutionary theory (species were not created in one fell swoop – Darwin), and continental drift (continents are not fixed -Wegener).

· Inspiration from these areas can inspire a new economic view. Policy implications are:

1. Stop the herd from adding to the problem – reconsider all areas of policy that promote unnecessarily high borrowing levels (such as student debt).

2. Change the course of the monetary river – the flow of money from the banks needs to be rerouted from the top to the bottom of the economy (quantitative easing at the top doesn’t work).

3. Change the course of the fiscal river – lower taxation on labour (income tax) and higher taxation on capital (corporate profits).

· There is a good layperson’s review of the main economic schools: classical, neoclassical, libertarian, monetarist, Keynesian, Austrian, Marxist, institutional and behavioural, which the author helpfully plots on a graph.

· Nothing. It’s clearly written and provides a new perspective we can all understand.