No One Is Too Small To Make A Difference – Greta Thunberg

We must take immediate action to avert the climate crisis. 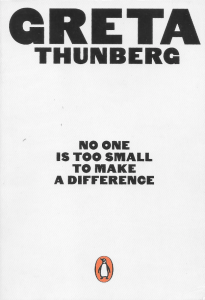 This is a short collection of speeches the author has made at various events between September 2018 and April 2019, including climate marches, the UN Climate Change Conference, and the World Economic Forum. Her thoughts include: