Noise causes flaws in human judgement and if ignored it can come at a great cost to individuals and organizations. 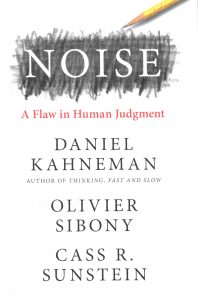 – Was an easier question substituted for the real one?

– Was any important factor or piece of evidence ignored?

– Was an outside view sought?

– Did dissenters express their views?

– Does anyone stand to gain from this decision?