Our goals are best achieved indirectly, so consider taking the oblique route. 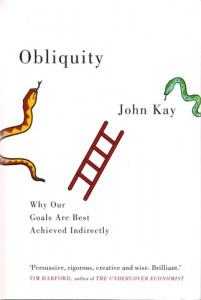 Objectives can be defined, clear and quantified v. loose and multi-dimensional

Interactions with others are limited v. actions and context influence next action

Range of options fixed and known v. only a limited number identified

What happens is what we intend v. outcomes arise on the way

Decisions made with full information v. only limited knowledge is available