One Plus One Equals Three – Dave Trott

Identifying and investigating areas we are not naturally interested in massively multiplies the amount of new connections we can make. 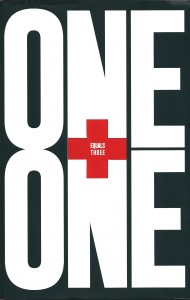 1. Regret is worse than embarrassment

You need the balls to try things and not worry about potential failure.

Change the problem you can’t solve into one that you can.

3. The spirit of the law, not the letter of the law

Good ideas are first ignored, then considered dangerous, then deemed to be obvious all along.

4. The message is the medium

Language choice is important, but it’s also where and when you say something that matters.

5. Disaster is a gift

When everything goes wrong, you have to change the plan and think again, leading to much increased creativity.

6. The value of ignorance

If you don’t know what apparently can’t be done, you can think freely.

Reinterpreting the brief is often solving the problem.

Before you sell the answer, sell the need.

“In Italy for thirty years under the Borgias, they had warfare, terror, murder and bloodshed, but they produced Michaelangelo, Leonardo da Vinci and the Renaissance. In Switzerland they had brotherly love, 500 years of democracy and peace, and what did they produce? The cuckoo clock.”