The financial sector has grown too large, is detached from ordinary life, and mostly trades with and talks to itself. 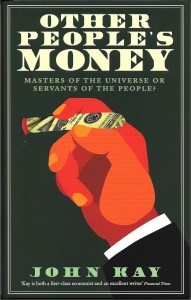