In overconnected situations, institutions change so fast that the environment can’t cope, or vice versa, so we need to know where to draw the line online. 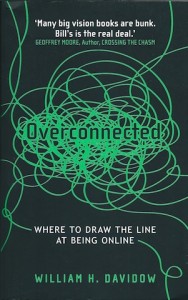 1. Underconnected: isolated ancient civilizations, primitive cultures and a few undeveloped countries. Change is slow or non-existent, and any interaction with an outside environment leads to a big shock, or sometimes even complete destruction, followed by a dangerous cultural lag.

2. Interconnected: where the system changes gradually, businesses, governments, and economic systems can keep pace. There is little or no cultural lag, and each element catches up fast enough with the others.

3. Highly connected: a critical level of connectivity that appears to make everything go right. This is the optimum state, so long as adjustments to change come fast enough to keep up. If not…

4. Overconnected: institutions change so fast that the environment can’t cope, or vice versa. This is where it all goes wrong (cf. Iceland, or any financial crash)