Read This Before Our Next Meeting – Al Pittampalli

Reducing the number and length of meetings increases productivity. 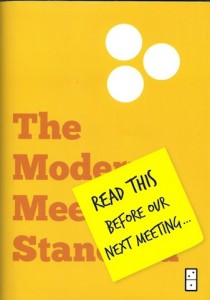 1. Meet only to support a decision that has already been made

(Nb. There is something of a disconnect here between the author’s notion that the only two activities worth convening a meeting for are conflict and coordination – if the decision has indeed already been made but the objections are forceful, then things will get messy)

2. Move fast and end on schedule
3. Limit the number of attendees
4. Reject the unprepared
5. Produce committed action plans
6. Refuse to be informational. Reading the memo beforehand is mandatory
7. Work alongside brainstorms, not against them