It is possible to increase the accuracy of forecasts by acting as superforecasters do. 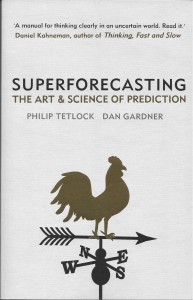