Note: Undoubtedly the bit everyone will latch onto is in chapter 5. When a big volcano erupts it fills the atmosphere with enough sulphur dioxide to cool the earth for a year or two. If we pumped this into the atmosphere anyway, it would achieve the same effect, but ironically upset environmentalists in the process.

As those of you who know me will know, I have a few views on volcanos myself (recent Radio 4 interview). Enjoy the debate…

The more that you look at the world with an economist’s mind, the more straightforward it gets, and the funnier, because even the most obscure people respond to incentives. 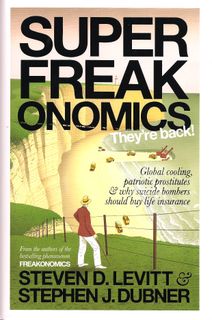 The more that you look at the world with an economist’s mind, the more straightforward it gets, and the funnier. Even the most obscure people respond to incentives.

This ‘freakquel’ claims to be bolder, funnier and even more surprising than its predecessor, the multi-million selling Freakonomics. It is full of things you always thought you knew but didn’t, and things you never knew you wanted to know but do.

Everything can be explained by economics, such as:

Price discrimination affects most markets, and some customers have clearly identifiable traits that place them in the willing-to-pay-more category.

There are birthdate bulges everywhere – where certain deadlines, term times and so on dictate that the best in various occupations will be born in the same month (this is also covered in Outliers by Malcolm Gladwell).

It’s not a textbook, so roll with the narrative and dig out the nuggets.