There is a gap between what people say in surveys and what they really think, so you need to work out what their answers actually mean. 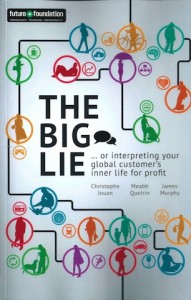 · The Big Lie is the gap between social norms and private reality, between expressed opinions and inner emotions, between what people say in surveys and what their answer actually means.

· There is a juxtaposition between how people live inside their heads and the generalised assumptions made by those people and the companies that market to them.

· Businesses need to create products and communications campaigns that tap into consumers’ realities as well as their projected personas.

· Consumers need to feel good on two levels – a duality that needs recognising. This duplexity means consumers are capable of ‘living in two apartments at the same time.’

· Four main areas are dealt with:

Despite what individuals claim, groupthink and social copying dictate many decisions and opinions.

People will only go so far to live a truly co-friendly and green life.

4. The Call of Yesterday, The Scream of the New

Everyone claims things were better in the past, whilst craving everything that’s new.

· People now have effective knowledge – a good understanding of how everything works and how they should be seen to be behaving, so they can easily claim one thing and do another.

· They also have a new ruthlessness, and do not want to let go of their living standards.

· For consumers, perfect is often not worth the price.

· Research is pretty much incapable of replicating the living process that affects most purchasing decisions. No matter what people say in surveys, it’s never that simple.

· The Big Lie can = The Big Lazy. People may think responsibly, but then fail to act accordingly, creating a disconnect between opinion and action.

· The book would benefit from a decent index.

· It is produced by the trends and forecasting agency The Future Foundation, and often strays into becoming a brochure for the company.

· The first half of the book is written in an over flowery style. A more balanced approach would have provided some academic calmness.