We lie to everyone, especially ourselves, but our propensity to do so hinges on the amount to be gained and the probability of being caught. 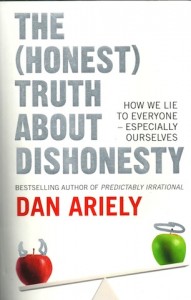 1.     Cultures that give examples of dishonesty (think Enron)

3.    Seeing others benefiting from it (just one person is enough in each case)

4.    Being depleted, such as tired or hungry (when we suffer ‘ego depletion’, we are more likely to lie, to ourselves in particular)

6.    Creativity (creative people are more dishonest because they can invent cleverer excuses, stories, and rationales)

7.     Conflicts of interest (experts such as dentists suggesting treatments)