70% of global emissions come from the same hundred companies, but they have taken no responsibility themselves – instead, they have waged a 39-year campaign to blame individuals for climate change. The result has been disastrous for the planet, and it’s time to fight back. 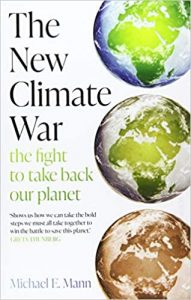 The evidence keeps coming, in a somewhat relentless way, over 200 pages. It’s all meticulously referenced, but arguably a little overwhelming at times for the lay person.

Michael Mann is one of the scientists behind the galvanising so-called ‘hockey stick’ graph. Published in 1999, it showed the average global temperature remained relatively stable for nearly 1000 years, until the data hit the 20th century. It showed an immediate, steep rise in temperature and it earned Mann years of harassment from those with vested interest in business continuing as usual.