The No Asshole Rule – Robert Sutton

Assholes should not be tolerated – at work or anywhere else. 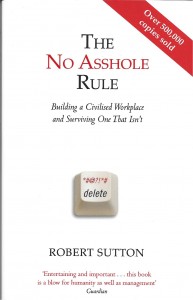