The economy is ultimately a genetic replication strategy, fueled by deductive tinkering. 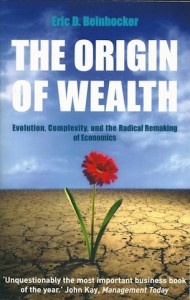 · This is a long and complicated book about evolution, complexity and the radical remaking of economics, originally written in 2005.

· What is wealth, how is it created, and how can we create more of it? Old economic theory is being overturned by an evolutionary stew, a complex adaptive system, more akin to the brain, the internet, or an ecosystem

· The economy is one of humanity’s most complex creations. Have a think about all the things in your life: the level of human coordination needed to make it all happen is mind-boggling, and all effectively adds up to what we call the economy.

· We need to get away from the idea of Up and Down Economics (the stock market is up, employment is down). That type of vertical graph is outmoded.

· The economy does not revert to equilibrium every time it is subject to change – it is constantly in flux, something the author calls Complexity Economics. The laws of supply and demand are particularly crass. They aren’t laws and they don’t work.

· Government policies are usually wrong, because they don’t understand the dynamics, agents and networks that constitute complex adaptive systems.

· Scientists are shocked by the way economists make predictions, because they make too many simplifying assumptions in their models without verifying them. As such, their approach looks horribly out-dated, or frozen in time like American cars in Cuba.

· The economy is complex but not chaotic.

· Business cycles have been likened to wiggling jelly. A propagation mechanism inputs a shock into the economy. But the problem with the analogy is that the jelly eventually settles down, which the economy doesn’t, and it merely points to outside influences (nudging the jelly), not what’s happening in the middle.

· Punctuated equilibrium describes a pattern of alternating calm and storm, just like biological outbreaks and extinctions.

· Endogenous evolution creates design without a designer, through trial and error replication, sometimes known as good tricks for survival.

· It is long and complicated, but there are lots of fascinating ideas in it.