The Use of Lateral Thinking – Edward de Bono

Lateral thinking seeks to escape from the dominance of rigid and accepted ways of looking at things. 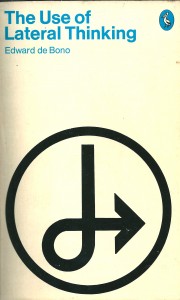 · Lateral thinking is an important addition to vertical thinking. It is more a habit of mind than knowledge of some technique.

· Vertical thinking is high-probability, straight ahead thinking. This is logic, and it is used to dig holes deeper and bigger, but always in the same place.

· Ideas do not, unfortunately, come about through sheer vertical effort.

· The arrogance of vertical thinking prevents the emergence of new ideas. This can be described as commitment to a half-dug hole – a reluctance to abandon the investment of effort that has gone into the vertical hole without seeing a fruitful return.

· As a result, dominant ideas are polarising. Sticking to them outright creates no forward motion and no new ideas. Lateral thinking seeks to escape from the dominance of rigid and accepted ways of looking at things.

· It is productive to deliberately search for the many different ways of looking at something. New views will lead to an effective re-synthesis.

· We should acknowledge the value of chance by not interfering, and by encouraging chance processes and harvesting the income.

· In general, there is an enthusiasm for the idea of having new ideas, but not for the new ideas themselves. New ideas do not only mean spending money – more often they mean saving money.

· The disadvantage of doing without lateral thinking is, in a nutshell, being stuck in a rut or wedded to one-dimensional approaches.

· Arbitrary division is called ‘analysis into component elements.’ When we describe something, we attach our own subjective view and language to it. The author uses a series of visual exercises in which someone has to describe shapes using only words. These demonstrate how subjective our descriptions are.

· With lateral thinking one wanders and wonders.

· Brainstorming involves a junk-collecting attitude. Although ideas and material may seem irrelevant at the time, they remain in the picture and can later be attached to a relevant issue – as a result, magpie minds are the most productive.

· To demonstrate this seemingly random approach to idea generation, the author uses a paper clip analogy. A chain of them can be made by carefully and deliberately attaching one to the other. Equally though, opening the clips a little, chucking them into a pan, and tossing them around will also create a chain. Like evolution, the resulting design will be more original than something done ‘vertically’.

· Nothing. It is short and thought provoking.