Understand and decipher incentives and measure results accurately, and you are much more likely to solve problems. 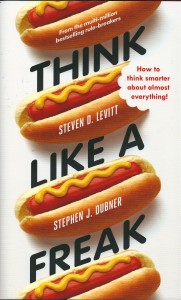 1. Incentives are the cornerstone of modern life. Understanding or deciphering them is the key to understanding a problem and how it might be solved.

2. Knowing what to measure and how to measure it can make a complicated world less so. Numbers reduce confusion and highlight contradiction.

1. Think like a child: saying “I don’t know” is very powerful and liberating. There’s no need to be embarrassed by how much you don’t know – often it leads to a better way.

2. Think like a rock star: David Lee Roth’s famous backstage rider banning all brown M&Ms disguised something far more inspired. Van Halen’s show required major resources and detailed planning from the venues they played – if the promoters hadn’t read the detail on page 40 of the contract, then everything else needed checking too.

· This approach is in effect a case of Teach Your Garden to Weed Itself. Framing incentives reveals what you need to know about the respondent(s). The reason that Nigerian scam emails work is that anyone stupid enough to respond immediately reveals themselves as gullible.

· If you are designing an incentive scheme, you need to: work out what people really care about, not what they say; use dimensions that are valuable to them, but cheap to you; learn from responses; change the frame from adversarial to cooperative; never assume people will do the ‘right’ thing; acknowledge that some people will do everything to ‘game’ the system – applaud their ingenuity rather than curse their greed.

· If you want to persuade people who don’t want to be persuaded:

~ Understand how hard it will be and why

~ Remember that you are just the producer of the argument, not the decision maker

~ Don’t pretend your argument is perfect

~ Acknowledge the strengths of your opponent’s argument

~ Tell stories to dramatize your case.

· If you think like a freak, there are two broad lessons to be learned:

1. Redefine the problem you are looking at.

2. Establish the limits you will accept, or refuse to.

· “Once and done” was a new concept in charity fundraising introduced by the children’s facial disfigurement charity Smile Train. Telling donors you won’t pester them ever again if they donate once actually increases donation levels, because it hands power back to the individual.

· The premortem – in which you have to predict what will go wrong before starting a project – works even better if it is made anonymous. Amazingly, NASA experts specifically predicted that Challenger’s O-rings would blow, but they were overruled.

· “Prediction is very difficult, especially if it’s about the future.” Niels Bohr

· Ultracrepidarianism is the habit of giving and opinions and advice on matters outside of one’s knowledge or competence.

· The more the authors make sense (which they do), the more the word ‘freak’ seems inaccurate.