Be aware that your brain has two systems – fast intuition and slower conscious thought – and allow for these when looking at decisions. 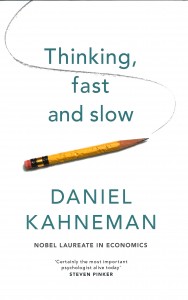