Uncommon sense can provide companies with the advantage they need to rise above common nonsense. 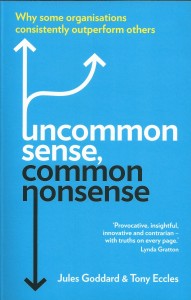 1. Armies make a cock-up of everything.

2. The more they try to do, the greater the chances of a cock-up.

3. The best way to win battles is to do nothing and wait for the other lot to cock things up.

~ “Companies are rarely killed; they prefer to commit suicide.”

~ “There is nothing as useless as doing efficiently that which should not be done at all.” Peter Drucker