We Are All Weird – Seth Godin

Weird is the new normal, so only companies that work that out have any chance of survival. 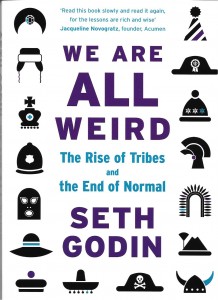 ~ Mass is what allowed us to become efficient. It’s what we call the undifferentiated, the easily reached majority that seeks to conform.

~ Normal is what we call the people in the middle. It is localised – what’s normal here is not necessarily normal somewhere else.

~ Weird is what we call people who aren’t normal. This means by choice, rather than unusual by nature or physique.

~ Rich refers to anyone who can make choices, who has enough resources to do more than merely survive.

1. Creation is amplified. Anyone can produce pretty much anything, and reach someone else immediately via the internet.

2. Being rich allows us to do what we want, and we want to be weird. Standing out takes time, money and confidence. More of us now have all three.

3. Marketing is far more efficient at reaching the weird. The long tail isn’t just a clever phrase – it’s an accurate description of the market for just about everything.

4. Tribes are better connected. Because you can now find others who share your interests, weird is perversely becoming more normal.