Go for a walk, cultivate hunches, write things down, but leave things a bit messy so that unexpected links can be made – better thinking will follow. 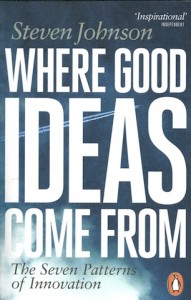 · By recognizing where and how patterns of creativity occur, we can discover the secrets of inspiration.

· There are seven patterns of innovation:

1. The Adjacent Possible: coined by scientist Stuart Kauffman, this refers to the nearest next steps that can be made. It opens up many possibilities, and often generates interesting ‘spare parts’, but is finite.

2. Liquid Networks: ocean life is so fertile because liquid enables things to flow between each other easily and cross-fertilize. Recreating this liquidity in solving problems helps enormously.

3. The Slow Hunch: Aha! or eureka! moments are unusual. Most great ideas start with a hunch and slowly develop. If you write down the rough idea, it is more likely to emerge as a breakthrough later.

4. Serendipity: when we dream, the brain is having a clearout. Unrelated thoughts often come together in ‘generative chaos’. Daydreaming and being a mental magpie have a similar effect.

5. Error: high productivity ultimately leads to high quality, with the errors of the ‘great mind’ exceeding those of the less vigorous one. Probe at the edges of error for more interesting results.

6. Exaptation: coined by evolutionary biologists Gould & Vrba in 1971, something extracted from elsewhere is adapted for a new purpose. Gutenberg’s printing press was an adapted wine press; dinosaur feathers were adapted for warmth, but exapted for flight.

7. Platforms: coral reefs, beaver dams, GPS – things built on other things are a great basis for innovation. You don’t always have to start from scratch.

· Further confirmation here that brainstorms are largely ineffective, mainly because the odds are against two employees being in sync at the same time. More likely they will have promising hunches individually at different times.

· Noise-free environments are not conducive to innovation – the best labs are always a little contaminated.

· Recognise the strength of weak ties – knowing a little about lots of other areas can be very helpful to your main field.

· The coffeehouse model of creativity involves batting ideas around in a relaxed environment. DNA discoverers Watson and Crick did this frequently during extended breaks.

· He classifies 200 of the most important innovations in the last 600 years by market (designed to make money)/non-market (non-commercial) and individual/network (collective distributed process). Plotted on a chart, the non-market/network section, the so-called Fourth Quadrant, has generated the majority of innovations since 1800.

· Not much. It’s very thought provoking.